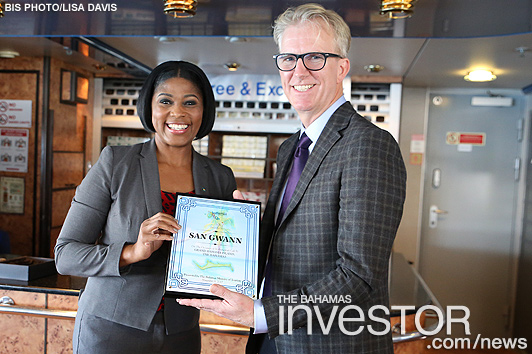 The occasion was the start-up of a three-times-a-week service between Miami, Florida, and Grand Bahama.

The 175ft, 427-passenger vessel will make the journey to Freeport on Mondays, Thursdays and Saturdays, leaving the Port of Miami at 8.00 am, arriving at Freeport Harbour at 11.00 am. It will make the return journey for Miami at 6.00 pm.

During a plaque presentation on board the ship, Parker-Edgecombe said the ship comes at a very appropriate time and has the capacity to bring some 60,000 passengers to Grand Bahama annually. Further, she said it was her desire to see the company increase its scheduled service to the island.

She pointed out that the government of The Bahamas has stated repeatedly that the rebound of Grand Bahama Island is of paramount importance and that a healthy and vibrant Grand Bahama economy is vital to the growth and development of the entire Bahamas.

She said that while the government continues the fight for new air traffic to the island, they are equally mindful of the importance of cruise passengers to the economy.

“And so on behalf of the people of Grand Bahama Island and the government of the Commonwealth of The Bahamas let me welcome FRS to our island and pledge our support to do whatever we can to make this venture a success.”

“I look forward to the day when that will be a daily service; and I firmly believe that day will come as the government of which I am proud to be a part moves to restore Grand Bahama to its glory days,” she stated.