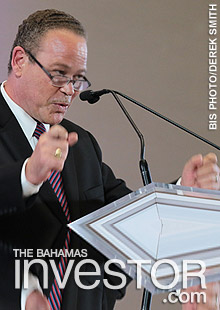 He said The Bahamas is pleased to host the meetings, bringing together a wealth of the strongest legal minds connected under the auspices of Great Britain’s network of nations.

“The meetings, which bring together attorneys general and law ministers from the 52 Commonwealth countries, are intended to facilitate discussions on legal and administrative issues of concern to member countries, and to the broader Commonwealth of nations and international community,” said the Attorney General.

“These meetings give us the opportunity to not only interact with our colleagues in the Commonwealth, but to engage in meaningful discussion on how we, as a group, can assist each other in addressing these issues of mutual interests.”

The Attorney General laid out the legal course of the conclave over the next few days by adding that the meetings also provide the opportunity for bilateral and multilateral meetings with regional and global counterparts to share experiences, discuss best practices, and explore the possibility of closer working relationships.

“During these meetings, we will focus on law reform and technology, two very important issues to countries around the world. Here in The Bahamas, we have been actively engaged in discussions with various stakeholders on Law Reform measures and are consistently reviewing the administration of justice in our jurisdiction with a view on how we become more relevant and effective in an ever-evolving society,” said the Attorney General.

Bethel described the “two-edged sword of technology” as the driving force of new methods of doing business globally, but also as “providing new methodologies to those seeking to conduct serious crimes or attack the civil order of society; it is impacting every sector of society”.

“We, as attorneys generals and law ministers, must not only be aware of the technological advancements, but fully understand the impact they are currently having, and the potential impact, positive and negative, that technology can have in the future, on the administration of justice in our individual countries and by extension the entire Commonwealth. We need to discuss how we embrace technology as part of the creation of a more efficient justice system as part of our reform measures.”

He also advised that “The Commonwealth has recently launched some new exciting tools,” which will be presented to the Law Ministers Meeting, such as a new mobile App, which is forthcoming and “will be demonstrated at the meeting, and will assist prosecution offices by ensuring secure, reliable communications in exchanging information across borders.”

“The Commonwealth’s new Office for Criminal and Civil Justice Reform will be a fantastic source of online information and collaboration for Commonwealth member countries,” said the Attorney General.

Bethel concluded by inviting participants to enjoy the beauty of the islands and bear in mind the responsibility to protect it as well.

“Recent hurricanes Irma and Maria have shown only too clearly how vulnerable we are to the threat of climate change. Law ministers will be discussing the importance of adequate legal frameworks to appropriately respond to natural disasters,” said the Attorney General.

“As we are getting ready for four days of lively discussions and fruitful exchanges, which is the aim of the Commonwealth Law Ministers Meeting, and of the Commonwealth as a family, I look forward to meeting with colleagues to debate, learn and share best practices, with the ultimate goal of improving our citizens’ lives by upholding the rule of law.”

Preliminary indications are that domestic economic growth remained relatively subdued, activity in the construction sector continued to be supported by FDI projects and ongoing hurricane reconstruction, and in the monetary sector, both liquidity and external reserves rose robustly.