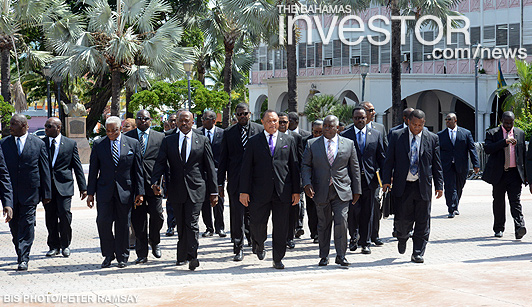 Prime Minister Perry Christie presented in the House of Assembly May 25, 2016, the latest developments on the status of the Baha Mar resort, especially as it relates to the global tender process that is being carried out by the Receiver Managers on behalf of the Export-Import Bank of China. Pictured: Prime Minister Christie, centre, with his Cabinet May 25, 2016. (BIS Photo/Peter Ramsay)

Prime Minister and Minister of Finance Perry Christie presented in the House of Assembly May 25, 2016, the latest developments on the status of the Baha Mar resort, especially as it relates to the global tender process that is being carried out by the Receiver Managers on behalf of the Exim Bank of China.

“My government has been advised that the first round of bids has just closed and that there are a number of good and reputable investors who have shown interest in the project and that these investors will be evaluated,” Prime Minister Christie said.

Prime Minister Christie, who was making the opening statement for the 2016/2017 Budget Debate, pointed out that it must be borne in mind that that ongoing process is being carried out under the supervision of the Supreme Court.

“Therefore, these matters are subject to confidentiality and, as such, only limited information may be shared by those who are running this process,” he said.

“It is hoped that the selected investor could be determined shortly and submitted for the necessary government approval.”

Prime Minister Christie noted that the Receiver Managers have confirmed that China State Construction Engineering Corporation (CSCEC) and China Construction America (CCA) Bahamas are still under contract to finish construction of the project.

He said that Exim bank, CSCEC and CCA Bahamas have committed to continue to work closely with the Bahamian government with a view to seeing the Baha Mar resort project through to 100 per cent completion.

“The Bahamian government is fully committed to providing all necessary assistance and cooperation required for the early remobilization, completion, opening and successful operation of the project – which includes the establishment, out of the Office of the Prime Minister, of a task force to enable proper coordination between government agencies,” he said.

Late last week, the government was invited by the Exim bank to Beijing, with a view to resolving pertinent issues to enable the early remobilization and completion of the project, including addressing the legitimate interests of Bahamian creditors, Prime Minister Christie stated.

“Therefore, given the importance of this matter, I sent a delegation to Beijing, led by Attorney General Allyson Maynard-Gibson and Sir Baltron Bethel, senior policy advisor in the Office of the Prime Minister, with a view to accomplishing these objectives,” he added.

Prime Minister Christie said that he was pleased to inform the House of Assembly that the discussions were successful and, then proceeded to read and then lay on the Table the House of Assembly a joint statement that was issued by Exim bank , China CSCEC and the representatives of the government of The Bahamas, giving further details about “the pathway forward”.

“I am satisfied, based on the statement and the assurances given in Beijing, that every effort is being made to enable an earliest possible remobilization and that adequate funding is in place to provide for the completion of the Project and the satisfaction of the legitimate claims of Bahamian contractors and suppliers,” he added.

“I have personally been meeting with representatives of employees and they will have every assurance, every single one of them who is willing to go back to work in that place, will be supported by the government of The Bahamas to get that done.”