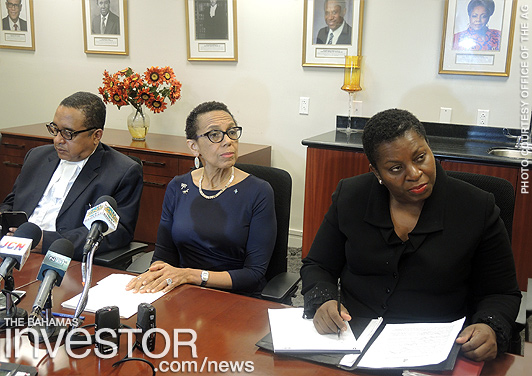 The Office of the Attorney General yesterday issued a statement regarding Baha Mar's decision to file for Chapter 11 Bankruptcy in the US and expressed dismay that neither the government or other significant partners were informed of the decision. Read the full statement here. Pictured: Attorney general and Minister of Legal Affairs Allyson Maynard-Gibson, center, answers questions from the media during a press conference at the Ministry of Legal Affairs July 2, 2015. To her left is the State Minister for Legal Affairs Damian Gomez and to her right is the director of Legal Affairs Antoinette Bonamy. (Photo courtesy Office of the Attorney General)

Here follows a statement by the Office of the Attorney General dated July 2 regarding the decision by megaresort developer Baha Mar Ltd to file for Chapter 11 Bankruptcy in the US:

On Monday 29 June 2015, Baha Mar Ltd and 14 affiliated companies involved in the Baha Mar Resort filed for Chapter 11 Bankruptcy in the Courts of Delaware, US.

Baha Mar did this without prior notice to the government of the Commonwealth of The Bahamas and related entities. And, we are advised that no advance notice was given to the China Export Import Bank (EXIM Bank), the China State Construction Company and numerous Bahamian employees and contractors.

Fourteen of the affiliated companies are incorporated and doing business in The Bahamas. They own, operate and have an interest in Bahamian assets and businesses, including much of the land comprising the Baha Mar resort.

As the public is aware, the Prime Minister, for the past several months and as recently as 26 June 2015, has been negotiating and communicating with the developer and the EXIM Bank to ensure sufficient funding to enable the opening of the resort at the earliest possible opportunity.

The government at all times will continue to act in the best interest of the Bahamian people. The successful completion and opening of Baha Mar is in the national interest and is a matter of national priority.

Of particular importance is that the nearly 2,400 Bahamian employees who have been prejudiced by this bankruptcy proceeding must be paid. Paying the employees without conditions attached would allow negotiation, hearing and resolution of other critically important issues determinative of the future of this project.

The developer was also advised that in the event that Baha Mar or the EXIM Bank was unable or unwilling to pay the workers, the government will step in and make the payment for this month while negotiations continue.

The government and the EXIM Bank today, believing that the Bahamian Supreme Court should hear from all parties with an interest in this matter, asked the Supreme Court to adjourn the developer’s application for the Bahamian courts to recognize the Orders of the Delaware court.

The Hotel Corporation of The Bahamas stands ready to make the payments.

It is important that the public be made aware that the orders obtained unilaterally by the Baha Mar entities from the United States Bankruptcy Court in Delaware were obtained on the basis that matters profoundly affecting the government and people of The Bahamas will be subject to adjudication in the United States. This would have serious and far-reaching implications for the Commonwealth of The Bahamas as a sovereign nation.

Completion and opening of the Baha Mar resort are matters of paramount importance to The Bahamas. The government feels very strongly that resolution of the disputes that have delayed the project should occur in The Bahamas, subject to adjudication (to the extent that they cannot be resolved consensually) by Bahamian courts, consistent with the sovereignty of The Bahamas.

The Office of the Attorney General and the government’s international lawyers are therefore examining options that will ensure that the courts of The Bahamas are front and centre in this matter. This would not preclude ancillary orders being sought from foreign courts should such orders be needed – but as a matter of high constitutional principle and in the interests of national sovereignty, it cannot be the other way around.

The government will continue to keep Bahamians advised of steps taken in this matter. Today for example, the government has instructed the Department of Information Technology to provide the means by which there will be access to the publicly available court documents in this matter and briefings on court proceedings as and when they occur. This information will be housed on the website of the Office of the Attorney General.

In closing, I cannot say this strongly enough: the government, led by the Prime Minister, will continue to do everything possible both through negotiations and lawful means to achieve the earliest possible completion of the project and its successful opening, in the national interest.

Minister of Foreign Affairs Fred Mitchell has issued a statement regarding the re-establishment of diplomatic ties between Cuba and the US. Read the statement here.

Baha Mar has stated that it is extremely concerned that the Supreme Court of The Bahamas has decided to adjourn until July 7 the hearing of Baha Mar's application for recognition of the US bankruptcy proceedings. The developer said that the adjournment has "very troubling implications for efforts to complete construction of the megaresort and open successfully."