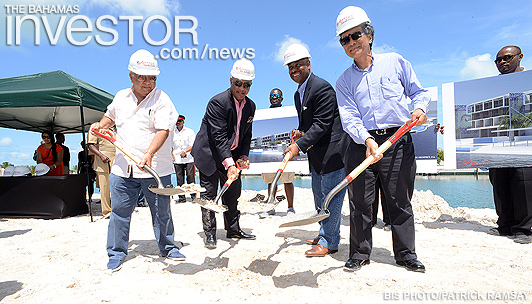 “A number of ministers and myself have come to join chairman Tan Sri KT Lim, his family and executive members of Resorts World in The Bahamas, a subsidiary of Genting, to announce and do the groundbreaking for a 350-room expansion,” said Prime Minister Christie.

“What is so significant about this is that it boggles the imagination when one tries to understand how 350-rooms would be here in three months from today,” he added.

The initiatives coincide with the Prime Minister’s recent announcement for the $150 million development plan spearheaded by Resorts World Bimini.

The new hotel will feature contemporary-Bahamian style architecture and will offer luxurious accommodation overlooking the ocean and located adjacent to the newly opened Resorts World Bimini Casino. It is anticipated that the top three floors, consisting of 300 rooms, will be completed by Christmas 2013 with the remaining 50 garden villa suites being completed by the end of January 2014.

The project will create over 100 construction jobs, and an additional 300 permanent jobs for Biminites and other Bahamians upon completion of the hotel. The new hotel will also provide new food and beverage facilities and extended hours in the operation of the resort facilities. Presently, more than 450 associates are employed by the resort with an additional 350 jobs expected at the completion of the expansion, bringing a total of 800 permanent jobs to the island.

BG Capital Group chairman Bobby Genovese has announced the launch of BG Signature Properties—a portfolio of 12 exclusive retreat destinations located throughout the US, Canada, Europe, South America and The Bahamas.