RBDF to get new naval bases

Following a six-year acquisition programme, the government of The Bahamas has announced the signing of a Letter of Intent to acquire nine vessels for the Royal Bahamas Defence Force and construction work for its naval bases, according to the Dredging Today website. 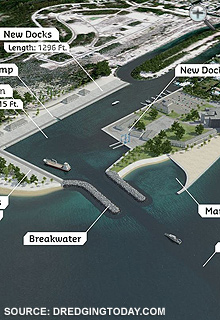 Following a six-year acquisition program, the Government of the Bahamas has announced the signing of a Letter of Intent to acquire 9 vessels for the Royal Bahamas Defence Force and construction work for their naval bases.

The contract has been placed with Damen Shipyards Group, headquartered in Gorinchem, the Netherlands.

In announcing the contract, the Minister of National Security, the Hon. Dr. Bernard Nottage, stressed that his Government was determined to protect the security and economic well-being of the people of the Bahamas and this order was a powerful endorsement of this commitment.

Naval base construction works
The project will include the acquisition of a fleet of various vessel types and the upgrading and construction of three bases in the Bahamas. There will be additional dredging works to facilitate the new long range patrol craft and to provide the Defence Force with first class facilities.

Partnership with Van Oord
Damen has been in business for over 85 years. In that time Damen has not only specialised in vessel design and shipbuilding, but also in the logistical and civil engineering challenges that often surround major new building projects. For the Royal Bahamas Defence Force project the company is partnering with one of the world’s largest dredging companies – Van Oord – to deliver the entire package in the shortest possible time frame, commencing in early 2014. The contract will include a spares and training package and great emphasis will be placed on skills transfer to ensure the vessels can be maintained and operated by Bahamians.

Much of the work to be undertaken by Van Oord will be subcontracted to local partners and will enhance access to Matthew Town in Greater Inagua and Gun Point in Ragged Point. Additional works and marine assets are earmarked in Bimini and Grand Bahamas to ensure the northern zone is also fully protected.

Damen Area Director Americas, Mr Sander van Oord, said: “Damen is a company that prides itself on the quality and performance of the ships we build. We are delighted to welcome the Government of the Bahamas to our family and will strive to deliver this package on time and within budget. These are the hallmarks of Damen that have helped us become market leader in the Caribbean.”

Director of sustainable tourism in the Ministry of Tourism Earlston McPhee says that The Bahamas should look to its rich history of agricultural development to help find new synergies with the tourism industry. Watch an address by McPhee here.