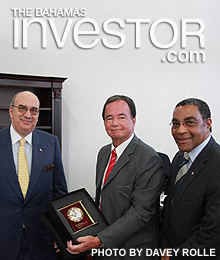 The visit was designed to consolidate existing relationships and to seek new business opportunities in the fastest growing oil and gas offshore market in the world.

BMA’s chairman, Anthony Kikivarakis, says: “The Bahamas prides itself on service and sees the shipping industry and related services as the third pillar of its economy.”

Initially, the BMA held talks with the Maritime Authority of Brazil and with Vice Admiral Raul Bittencourt, deputy executive secretary, Brazilian Navy Directorate of Ports and Coasts, after which the delegation visited the Brasa Shipyard in Niteroi, where they saw fabrication of topside modules for a Floating, Production, Storage and Offloading (FPSO) unit.

Additionally, the BMA held meetings with the following agencies:

Petrobras – the Brazilian integrated oil and gas company which is the world’s 7th largest and with operations in 25 countries.

Companhia Vale do Rio Doce – a Brazilian multi-national diversified metals and mining corporation, one of the largest logistics operators in Brazil, the second largest mining company in the world and an operator of large bulk carriers.

SBM (Single Buoy Mooring) Offshore – Rio Office – a leader in floating production and mooring systems, in production operations and in terminals and services.

Odebrecht Oil and Gas Services – OOG provides integrated, customized solutions for the upstream oil industry in Brazil and around the world.

The BMA’s objective was not only to increase its tonnage, but also, as part of the global shipping industry, to promote safety, security and the protection of the environment.

The authority is currently ranked fifth among flag states, with more than 1,600 ships on the Register and a gross tonnage of 57 million.

The face-to-face exercises with clients and potential clients as well as the on-hand technical expertise were well received by the delegation’s Brazilian hosts.

The BMA is planning to revisit Brazil later this year in order to maintain this positive momentum and relationships developed during its April initiative.

Following a six-year acquisition programme, the government of The Bahamas has announced the signing of a Letter of Intent to acquire nine vessels for the Royal Bahamas Defence Force and construction work for its naval bases, according to the Dredging Today website.

RBDF to get new naval bases