Prime Minister Perry Christie has announced initial policy actions that he claims will allow the government to arrest the growth in the debt to GDP ratio by 2014/15, and begin a gradual reduction in the ratio to just over 50 per cent of GDP by 2016/17. 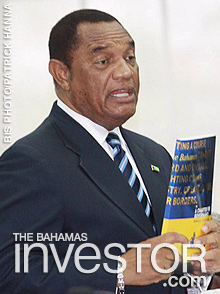 Prime Minister the Rt Hon Perry Gladstone Christie holds up the Progressive Liberal Party’s Charter for Governance, which holds many of the policy thrusts announced in the Government’s 2012/2013 Budget. (BIS Photo/Patrick Hanna)

Prime Minister Perry Christie has announced initial policy actions that he claims will allow the government to arrest the growth in the debt to gross domestic product (GDP) ratio by 2014/15, and begin a gradual reduction in the ratio to just over 50 per cent of GDP by 2016/17.

To achieve these two goals, recurrent revenue will be significantly and structurally enhanced through a wide range of measures, the Prime Minister said during the 2012/2013 Mid-Year Budget Statement on the six months ending December 31, 2012 at the House of Assembly, February 25, 2013.

The Prime Minister said that the government is establishing a Central Revenue Agency to strengthen the efficiency and effectiveness of revenue collection across a number of major taxes.

Christie added that the government is implementing a broad tax reform package that includes the introduction of a value added tax (VAT) in July 2014.

“While that is an ambitious timeframe, I would note that we have had the benefit of detailed studies of the feasibility of VAT in The Bahamas.”

“The White Paper contains a fully articulated policy framework for VAT. Following the public consultation process, the government will present a refined proposal, and advanced legislation to bring VAT into effect.”

The Prime Minister said: “Our target is to circulate the draft legislation for VAT by the second quarter of the next fiscal year. With the introduction of VAT, along with the reduction in other taxes set out in the White Paper, we expect a net 2.2 percentage points of GDP improvement to recurrent revenue annually.”

He also said that the government is committed to wide-ranging reforms of the property tax administrative system that will add one per cent of GDP to recurrent revenues by 2016/17.

The government is undertaking a comprehensive customs reform and modernisation programme, assisted by the Inter-American Development Bank that will add revenues equivalent to 0.5 per cent of GDP.

“We are also introducing excise stamps on tobacco products that will sharply enhance compliance and add 0.2 per cent of GDP to revenues. The draft Bill has already been tabled in Parliament. This regime will become operational early in the next Fiscal Year.”

The Prime Minister said: “All told, these measures will contribute to boosting the revenue yield of our tax system by almost four points of GDP by 2016/17. That will bring our yield somewhat closer in line with that generally found elsewhere in the Caribbean, though still at the lower end of the range.”

He said that the government is taking such policy actions to return the public finances to a more desirable position.

Prime Minister Christie noted that in December 2012, Moody’s announced a downgrade in the country’s credit rating along with a negative outlook.

“To underpin its statement Moody’s cited a significant deterioration of the government’s balance sheet since 2007, which was exacerbated by a low revenue base, and a high and rising debt level.”

“In September 2012, Standard and Poor’s downgraded the outlook for our credit rating to negative over similar concerns about our debt dynamics and the strength of our commitment to fiscal reform.”

The Prime Minister said the latest IMF Article IV staff consultation report that was presented to the Executive Board of the Fund February 4, 2013, also calls for the implementation of a medium-term framework for broad-based fiscal consolidation to address “the imperative of a lower debt burden.”

He said as the country faces the prospects of higher rates of interest on any future borrowings at a time when the country’s annual interest expenses already exceed $200 million and consume roughly one out of every seven revenue dollars.

“That is money that is simply siphoned away from the valuable programmes and services the government could be providing to the public each and every year. Moreover, the additional financing needs of government that are met in the domestic market divert credit that could otherwise be available to Bahamian businesses and the general public.”

During the 2012/2013 Mid-Year Budget Statement at the House of Assembly, February 25, Prime Minister Perry Christie said the International Monetary Fund (IMF) forecasts that the Bahamian economy will grow by 2.7 per cent in real terms in 2013.

Toyota officials and special guests from throughout the Latin American and Caribbean region will arrive in Nassau February 27 aboard the Celebrity Constellation cruise ship as part of the celebrations marking 60 years of company's presence in the region.

IMF forecasts economy to grow by 2.7 per cent