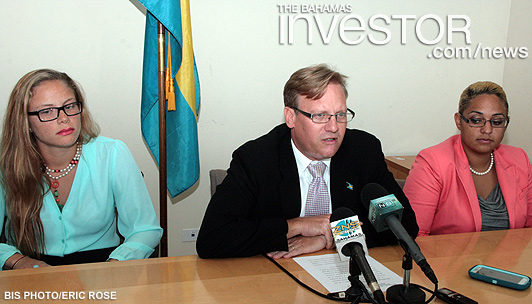 “The National EPA Implementation Unit’s objective is to provide technical support and education resources to intergovernmental agencies and the private sector to facilitate trade under the EPA and overall coordination of the implementation EPA obligations,” Minister Pinder said.

He added: “In addition, the National EPA Implementation Unit will be responsible for development and implementation of a communications strategy; co-ordination of the monitoring and evaluation process; identification of EPA implementation related technical co-operation needs and development of appropriate project funding proposals; participation in regional implementation efforts and co-operation with the private sector to increase business opportunities in CARIFORUM and the EU.”

Minister Pinder noted that in 2008, The Bahamas became a signatory to its first reciprocal trade EPA–the trade agreement between members of the European Union and CARIFORUM, comprising of members of the Caribbean Community and the Dominican Republic.

“Over the period of four months, representatives of the public and private sectors engaged in bi-lateral meetings and multi-sectoral stakeholder meetings with the Ministry of Financial Services officials and international consultants to discuss the impact of EPA and offer recommendations for the National Implementation plan,” he said.

To support the mandate of the National EPA Implementation Unit, Minister Pinder said, the government of the Bahamas has applied for preliminary grant funding, which will support the development and implementation of a communications strategy, training and securing technical support for implementation.

“The EPA provides many opportunities for economic growth for The Bahamas through international trade, market access and other economic partnerships,” Minister Pinder noted. “The implementation of the EPA will cause for domestic businesses to have access to larger markets, reduced tariffs and quotas, creating new and expanded opportunities for Bahamian businesses in the global marketplace.”

“More specifically, Bahamian business will now have access to a European clientele. EPA provides the opportunity for businesses to have global clients at their fingertips.”

Through on going initiatives the government is committed to educational initiatives and consultations to engage all stakeholders and interested persons, Minister Pinder added.

Minister Pinder said the EPA would provide expanded opportunities for Bahamian businesses, both in the trade of goods and services.

Also, he added, the National EPA Implementation Unit created within his Ministry, in partnership with the Bahamas Trade Commission, is tasked with the responsibility of ensuring the public and private sectors have the technical support and knowledge to be fully integrated into the process.

Associated Luxury Hotels International (ALHI) has expanded its meetings and incentives offering in the Caribbean and The Bahamas and launched its new ALHI Caribbean Collection specialty segment. Pictured: The One&Only Ocean Club on Paradise Island (Photo via oneandonlyresorts.com).