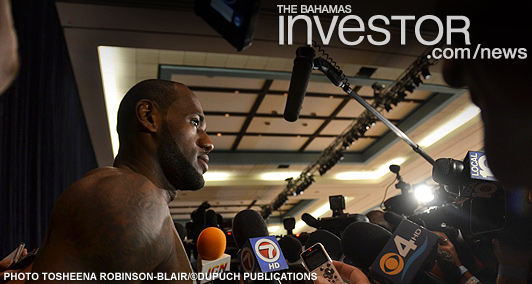 Two-time defending NBA champions Miami Heat arrived in The Bahamas Monday night for a four-day training camp at Atlantis Paradise Island. Pictured: Lebron James is thrown questions from the press during the training camp being held this week in The Bahamas. (Photo Tosheena Robinson-Blair/©Dupuch Publications)

Two-time defending NBA champions Miami Heat are going “back to the basics” during the training camp this week being held in The Bahamas.

The camp runs from October 1-4 at Atlantis Paradise Island. It is only the second time in star player Dwyane Wade’s recollection that the Heat has left Miami for training camp.

It’s a trip that the team and tourism officials had planned for some time, says coach Erik Spoelstra.

“We think this is a very good environment for us to get to work, getaway and get back to building some habits that we’ll need,” he said during a press conference held yesterday.

The Atlantis resort’s Imperial Grand Ballroom has been transformed into a professional basketball court for the camp.

“Anything that goes to promoting The Bahamas and Atlantis we are happy to be a part of,” added Ed Fields, senior vice president of public affairs at the resort.

“This shows our potential as a country to host many, many events,” said Field. “Build it and they will come.”

Odyssey Aviation brought the Heat to The Bahamas Monday night and the team was treated to a Bahamian junkanoo welcome, before being driven in a motorcade to Paradise Island.

“It was great to be welcomed with open arms to the island,” says Lebron James, a four-time league MVP, who has led the Heat to back-to-back NBA championships. “I thought it was pretty cool. We were humbled by it.”

He wasn’t the only one.

“We know we have fans everywhere… but to have another country show us appreciation like that is very important to us,” Chris Bosh told the local and international media Tuesday after players wrapped up an early morning training session.

The first day of training camp focused on getting players in motion and started around 9 am.

“We didn’t do one offensive drill we went back to the basics,” says Spoelstra. “We want to build the habits and fundamentals of our defense and not take it for granted.”

In the afternoon players carried out offensive work.

Although the training camp has been called a “mental reward” players are expected to not only work hard, but also to bond.

“It’s training camp. It just happens to be in The Bahamas,” said center Greg Oden, a newcomer to the Miami Heat.

The Bahamas trip presents an opportunity for the ball players to “clear our minds,” as Wade puts it.

“We get to have us time. We don’t have that as much as we would like, so this is great from that standpoint… to get down here and get back to the basics before we get back into that real world,” he told reporters.

“Atlantis is a very famous place and to let us come down here, to let us work, as well as clear our minds and enjoy ourselves, we appreciate it.”

The LPGA recently announced that the second-annual Pure Silk-Bahamas LPGA Classic will serve as the tour’s season-opening event when it returns to the Ocean Club Golf Course.

NBA's Miami Heat are in The Bahamas this week for a training camp. Watch a video about the visit here.

LPGA Tour to open in Bahamas