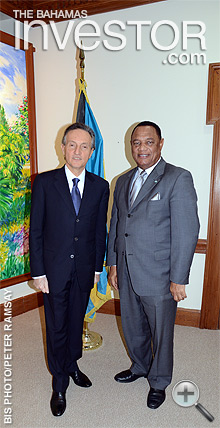 Claudio Bisogneiro, Ambassador of the Republic of Italy to the Commonwealth of The Bahamas, left, paid a courtesy call on Perry Christie, Prime Minister at the Office of the Prime Minister January 24, 2013. Click on the photo to see a small gallery of photos. (BIS Photo/Peter Ramsay)

Dame Marguerite acknowledged the diplomatic relations between both countries and the shared concerns regarding preserving the environment in the face of global warming and other concerns.

She said The Bahamas looks forward to the continued cooperation with Italy particularly in the areas of tourism, culture, renewable energy and climate change.

She acknowledged that The Bahamas welcomes the ambassador’s offer to share knowledge for effective preparedness and response to the increasing intensity and frequency of natural disasters and is open to dialogue on the promotion of food security for all nations.

Ambassador Bisogneiro noted that there are many practical ways in which both countries can demonstrate and solidify longstanding relationship.

Dame Marguerite thanked him for his offers for joint ventures in tourism, youth education and development, high-tech industrial machinery and information technology, as well as sustainable methods for the prevention of illegal migration, human trafficking and the transportation of illicit drugs.

“I must also extend the gratitude of The Bahamas for Italy’s continuing support for The Bahamas accession to the World Trade Organization,” she added.

Sterling Financial Group Inc announced last week that New Providence Income Fund has returned 1.01 per cent net to its investors for the month ended December 31, 2012–representing a 19.27 per cent return for the year.

St Vincent and the Grenadines, home to the Eastern Caribbean Office of the Caribbean Regional Fisheries Mechanism, will host fisheries industry experts from around the region next week.