Prime Minister Perry Christie yesterday announced plans to celebrate the 40th Anniversary of Independence, with the unveiling of an official logo and a ceremony in Rawson Square, Nassau. Pictured: Prime Minister Perry Christie (with official logo depicted) delivers the keynote address at the official launch of celebrations for The Bahamas’ 40th Anniversary of Independence in Rawson Square March 12, 2013. (BIS Photo/Peter Ramsay)

Prime Minister Perry Christie yesterday announced plans to celebrate the 40th Anniversary of Independence, with the unveiling of an official logo and a ceremony in Rawson Square, Nassau.

Plans include the introduction of a National Honour system to recognize “deserving Bahamians”, while the Prime Minister said that Parliament will move to make Majority Rule Day a national holiday.

The Prime Minister said the theme for the year of celebrations would be “The Bridge to the Future… The Journey Continues.”

“This theme suggests a transition, a crossing over and a progression and a connection to our past. It is forward looking, but acknowledges that we are continuing a great work,” he said.

The Prime Minister said among its other planned events, the National Independence Committee is working with The College of The Bahamas on hosting the 40th Anniversary Independence Conference.

He explained that the conference, which will be held June 12-14, is open to the public and will do much to help further educate and examine what the future holds for The Bahamas.

“The aim of the conference is to examine the context and construction of the Bahamian nation; investigate the challenges emerging in the post-independence period; discuss contemporary social, cultural, economic and political issues that have emerged since 1973; and explore future prospects for nation building and development.”

The Prime Minister also noted that in planning the celebrations for the anniversary, the committee felt it was critical to host events that will showcase Bahamian arts and culture.

At the conclusion of the ceremony, Christie unveiled the official 40th Anniversary Independence Logo created by artists Kishan Monroe and Addis Huyler. 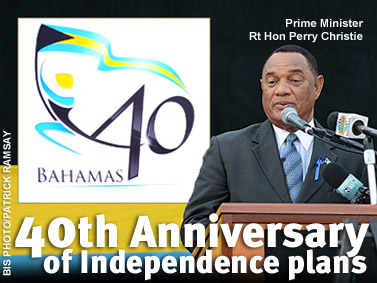 Bahamas Petroleum Corp chief executive officer Simon Potter has welcomed the government's clarification of the way forward for the industry, as responsible exploratory drilling will provide the data to inform future decision making, he says.