US provides $3.4m to tackle arms trafficking in region

The United States will be providing $3.43 million for a programme to combat illicit trafficking in firearms in the Caribbean region. 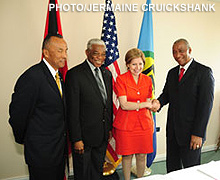 The United States will be providing $3.43 million for a programme to combat illicit trafficking in firearms in the Caribbean, which will include forensic training and officer exchange programmes.

The programme, part of the Caribbean Basin Security Initiative (CBSI), was launched December 5 at the headquarters of the Caribbean Community (CARICOM) Implementation Agency for Crime and Security (IMPACS) in Port of Spain. It is being spearheaded by the US Department of State and the US Department of Justice’s Bureau of Alcohol, Tobacco, Firearms and Explosives (ATF).

ATF deputy assistant director John Torres said his bureau “will bring our expertise and assist those in this country and in the area to maintain citizen safety throughout this initiative.”

He listed the five initiatives of the ATF strategy:

Torres explained the exchange programme will permit law enforcement officials to work for short intervals in the US.

Deputy Commissioner of Police Mervyn Richardson, who was in attendance at the ceremony, said the initiatives were welcome and the Police Service “will make maximum use” of them.

Citibank is celebrating its bicentenary this year and held a special reception event in Nassau December 4. Watch a ZNS news report here.