After several delays and setbacks, all financing and contracts are in place to begin the mega-resort project on New Providence's Cable Beach. The brainchild of Bahamas resident Sarkis Izmirlian, the development is expected to take four years to complete and contribute approximately $1 billion in new spending to the local economy during the first year of operation. Pictured above from left to right: Dikran Izmirlian, Sarkis's father; Li Ruogo, chairman and president, Export-Import Bank of China; Sarkis Izmirlian, Baha Mar chairman and CEO; Brent Symonette, Deputy Prime Minister. Pictured below: at the left sit Sarkis Izmirlian and his wife, Katie.

The project estimated to be worth $3.4 billion, is one of the largest private sector development projects ever to be carried out on Bahamian soil and is expected to be completed by 2014. The hotel resort complex will cover 1,000 acres and will house approximately 3,800 hotel rooms, a 100,000 sq ft casino, 18-hole Jack Nicklaus signature golf course, 60,000 sq ft retail village, and a 20-acre beach and pool “experience”.

The development is the vision of longtime Bahamas resident and chief executive officer and chairman of Baha Mar, Sarkis Izmirlian. Phase One of the project is being financed to the tune of $2.45 billion by Import-Export Bank of China, with construction being overseen by China State Construction Engineering Company Ltd. The entire four-year resort construction is expected to generate $400 million for local contractors and subcontractors, with a total of 8,000 Chinese workers also being employed on site at various times throughout the construction period.

At the groundbreaking ceremony held on the resort site on the Cable Beach strip on New Providence, Izmirlian said: “It has been a very long road, with many challenging twists and gratifying turns, but at no point did we ever doubt that we could do it. I am here today to say to every Bahamian that perseverance pays off.”

The project developer went on to say that the resort represents the start of the rebirth of the Cable Beach area, what he called the Bahamian Riviera. “Today, the whole world is watching The Bahamas and discussions in business circles around the planet are of Baha Mar in admiration of the things we have achieved. We are sending a clear message to the rest of the world that The Bahamas is open for business.”

“This is a historic day not only for Baha Mar, but for The Bahamas, our partners, and, the global tourism industry. Baha Mar represents an unprecedented alliance of powerhouses in the hospitality, financial and construction industries, and signals a shifting of the sands for the travel industry.”

Also speaking at the ceremony, Li Ruogu, chairman and president of the Export-Import Bank of China, said: “Baha Mar will be the most spectacular tourist resort in the Western Hemisphere once it is completed. It represents a milestone of mutually beneficial co-operation between China and The Bahamas.”

“It is a symbol of the further development of the sound relationship between our two peoples.”

Also present at the groundbreaking ceremony were Brent Symonette, Deputy Prime Minister of The Bahamas; Vincent Vanderpool-Wallace, Minister of Tourism and Aviation; Hu Dingxian, Ambassador of the People’s Republic of China to The Bahamas; and Liu Jinzhang, vice president of the China State Construction Company.

According to Baha Mar officials, once completed, the project is expected to contribute $1 billion to the local economy in its first year, providing 6,500 permanent jobs for Bahamians by 2014 and generating a $14.8-billion contribution to the nation’s gross domestic product over a 20-year period, with $500 billion in incremental government taxes generated over 25 years. 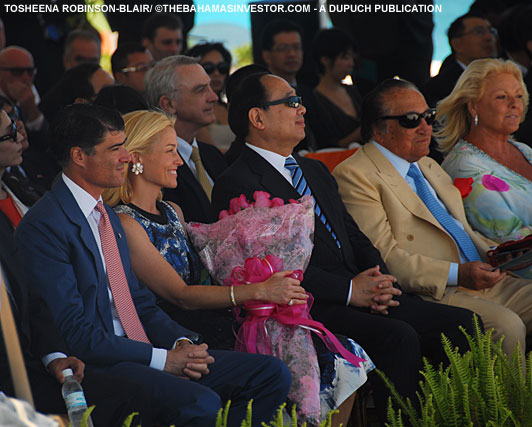 Top financial analysts debate the current geo-political climate in regards to investing and wealth management at an economic summit held in Atlantis Paradise Island. The three-day conference runs until February 19.

Newly appointed president of COB, Dr Betsy Vogel Boze, envisions a multi-campus system, with research facilities and teaching centres. “We will work this year to distill our essence, to provide the best advice for our future direction and to define the standards by which we, and others, will measure our success,” she says.

New president shares vision for College of The Bahamas