Officials from Bahamasair and the Greater Orlando Aviation Authority welcomed the arrival of a new non-stop service from Freeport to Orlando June 22, 2016. 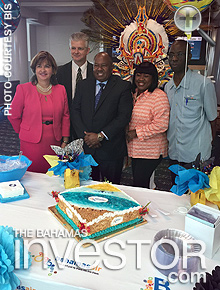 Orlando Florida – Officials from Bahamasair and the Greater Orlando Aviation Authority welcomed the arrival of a new non-stop service from Freeport to Orlando June 22, 2016.

Bahamasair chairman Valentine Grimes and senior manager of sales Woodrow Wilson, along with executives of the Greater Orlando Aviation Authority were on hand to greet passengers.

There were 70 passengers on board the brand new ATR aircraft, one of five purchased by the company in November 2015.

The service will initially operate two days a week, on Wednesday and Saturday but it is anticipated that as demand builds, the airline will increase its frequency.

Chairman Grimes remarked that the launch of this new service “signals our commitment to recapturing our competitive position as the preferred carrier of choice among the local market for travel to and from Florida.”

He also affirmed that marketing efforts through partnerships with the Ministry of Tourism, the Grand Bahama Island Tourism Board and the Greater Orlando Aviation Authority will ensure the further success of this flight.

“Bahamasair’s decision to launch new service at Orlando International is a testament to our long standing and successful 31-year relationship,” says Frank Kruppenbacher, chairman of the Greater Orlando Aviation Authority. “This new twice-weekly Freeport service will provide our passengers with options to yet another desirable international island destination.”