Bahamas teams up with Miami Dolphins 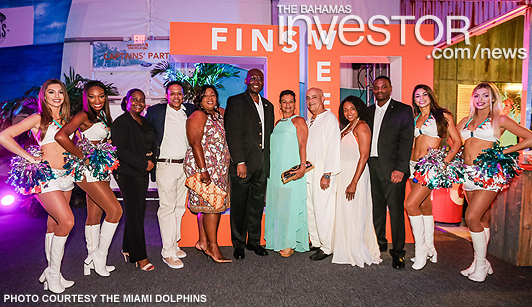 As part of its on-going partnership with the Miami Dolphins, The Bahamas Ministry of Tourism participated in the 20th Fins Weekend and provided Bahamian inspired tropical décor, desserts and live conch salad demonstration, at the three-day event. Pictured: Members of the Bahamas Ministry of Tourism team led by Greg Rolle, (center), Sr. Director, Sales, Marketing and Sports along with Bahamas Consul General Ricardo Treco and Mrs. Treco. (Photo courtesy of The Miami Dolphins)

As part of its on-going partnership with the Miami Dolphins, The Bahamas Ministry of Tourism (BMOT) participated in the 20th Fins Weekend and provided Bahamian inspired tropical decor, desserts and live conch salad demonstration, at the three-day event, which comprised golf, fishing, a Hook and Tackle Captain’s party and fundraising.

“As part of the BMOT’s five-year partnership with the Miami Dolphins, the Islands of The Bahamas is the official vacation destination for the Miami Dolphins’ fans, players and legends and its multi-islands brand is promoted to thousands annually at Sun Life Stadium. The organization also conducts an annual weekend of events in The Bahamas including fishing, boating, golf, a flag football match and community initiatives of football and cheerleading clinics for underprivileged children as well as supporting a local Bahamian charity,” said Shane Russell, Sports Manager at the BMOT.

The leading annual fundraiser for the Miami Dolphins, the Fins Weekend was held at the Miami Beach Marina and attended by hundreds of persons including current and former NFL players, executives and fans of the Miami Dolphins and some of the most influential businesspersons in South Florida.

The venue’s backdrop replicated Nassau’s historic parliament square and was decorated in the national colours of The Bahamas (gold, aquamarine and black) combined with the Miami Dolphins’ signature colours, orange and white. Bahamian conch vendor Edroy Brown, of Daddy Brown Conch Stand in Port Lucaya, Grand Bahama, provided a live demonstration of freshly made conch salad, which was a major hit with attendees. Guests also enjoyed Bahamian desserts of coconut tarts, benny and peanut cake and Bahamian made candies.

The Islands of The Bahamas also provided three popular prizes as part of the event’s silent auction program, same of which raised thousands of dollars for the fund. Among them were a $7,000 bid for a 5 days, 4 nights stay in an ocean deluxe suite at the Cove At Atlantis Resorts on Paradise Island and complimentary round-trip airport transfers from Fort Lauderdale to Nassau on Triton Airways. A $3500 bid secured a vacation getaway for 5 days, 4 nights stay at Hooter’s Owl’s Nest Penthouse at The Abaco Beach Resort. An auction war resulting in one of the highest bids of the night was for a trip to Bimini on board an 108 ft luxurious yacht with 4 days, 3 nights accommodations at Resorts World Bimini, inclusive of fuel, dockage and crew, which was won with an $8600 bid.

“The Miami Dolphins embrace our responsibility to be involved proactively as a positive force in the community. Today was a great day as we recently held our 20th Fins Weekend to raise money that will go directly to City Year Miami mentoring programs at two local schools in our backyard in Miami Gardens,” said Jason Jenkins, Miami Dolphins Senior Vice President of Communications and Community Affairs.

“We are so thankful for our fantastic partnership with the Islands of The Bahamas on this event. Our Friday night Hook & Tackle Captain’s Party featured beautiful decor, with every guest walking away with Bahamian desserts and conch salad! Such a great event that helped us raise much-needed funds to make an impact in our community,” he said. 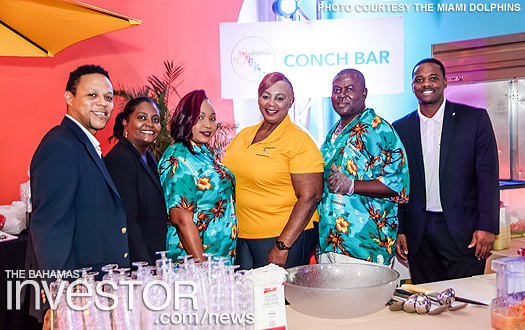