A match between Jamaica’s national football team and England’s Tottenham Hotspur is set to take place May 23 in Nassau as part of the celebrations for the 40th anniversary of the country's independence.

A match between Jamaica’s national football team and England’s Tottenham Hotspur is set to take place May 23 in Nassau as part of the celebrations for the 40th anniversary of the country’s independence.

The match will also be in celebration of the creation of the Caribbean Community (CARICOM), according to Minister of Tourism Obie Wilchcombe.

The match will take place May 23 at the Thomas A Robinson National Stadium.

Jamaica’s and Tottenham’s team representatives said they were looking forward to what they believed would be a sell-out match.

Horace Burrell, president of the Jamaica Football Federation, said his organization has received a flurry of enquiries about the match since it was announced. Calls have come from North America and the Caribbean.

Due to the interest expressed in the match, he advised fans to purchase their tickets right away. 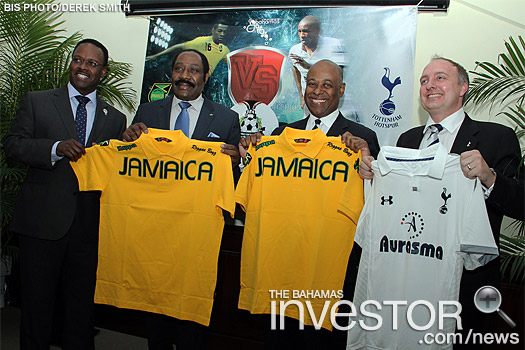 “Normally, we are a last minute people in the Caribbean, but I would certainly like to take this opportunity to respectfully suggest that the local fans purchase their tickets pretty early, because it is really going to be a sold out crowd,” Burrell added.

Darren Eales, director of football administration for the Premier League’s Tottenham Hotspur Football Club, said that his club is looking forward to a strong finish in the Premier League this season, with hopes of qualifying for the UEFA Champions League.

“We are also looking forward to working with The Bahamas Ministry of Tourism to help promote the country as a major hub for sports tourism,” he said.

Eales said the sporting facilities in The Bahamas make it an ideal destination for clubs and national sporting associations.