The Atlantic Magazine has published a NASA photograph taken by a member of Expedition 34 aboard the International Space Station looking down on The Bahamas from orbit January 13, 2013. Click on the photo to view (more Expedition 34 photos at theatlantic.com). 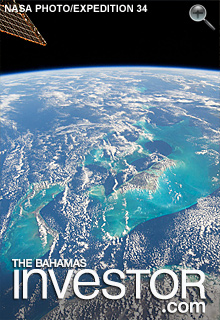 Pictured: (left) A photograph taken by a member of Expedition 34, aboard the International Space Station. Click on the photo to enlarge.

Back in November, the astronauts aboard the International Space Station (ISS) began Expedition 34, and entered into the 13th year of its continuous human habitation. Some of the research goals for Expedition 34 included investigations into the human cardiovascular system in microgravity, the gravity-sensing systems of fish, and the impact of changes in the sun’s electromagnetic radiation on Earth’s climate. The crew of six astronauts from the United States, Russia, and Canada also took hundreds of photographs of life aboard the ISS and the spectacular views from orbit.

This is an excerpt from The Atlantic Magazine (online) as it appeared on April 10, 2013. For updates or to read the current version of this post in its entirety, please click here.

The Ministry of Financial Services is holding a two-day conference in Nassau this week on the implementation of the US Foreign Accounting Tax Compliance Act. Pictured: Minister of Financial Services Ryan Pinder speaks during the first day of the regional conference on FATCA being held at the British Colonial Hilton April 9-10, 2013. (BIS Photo/Eric Rose)

Addressing attendees of a symposium on the US Foreign Account Tax Compliance Act, US Treasury and IRS representatives yesterday said that they believe that compliance with the new rulings would not be "overly burdensome" ahead of implementation at the beginning of next year.

US seeks to reassure Bahamas on FATCA