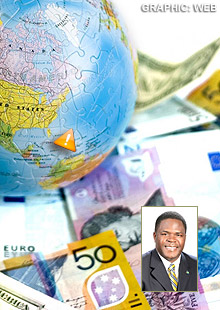 The government is “cautiously optimistic” that the economy has turned a corner and can now expect a return to consistent gross domestic product (GDP) growth in the short to medium term, according to Khaalis Rolle, Minister of State for Investment in the Office of the Prime Minister.

His announcement came Thursday during the Bahamas Chamber of Commerce and Employers Confederation’s Meet the Minister session, a monthly event.

This was the second such meeting.

Foreign direct investment (FDI) continues to be a major driver of The Bahamas’ economy, particularly in the tourism sector, said Rolle. Grand Bahama also has a burgeoning industrial sector led by FDI, he added.

According to Moody’s credit rating agency, The Bahamas’ 27 per cent gross FDI ratio led Latin America and the Caribbean region in 2012.

In 2011, The Bahamas received $1.7 billion in FDI, but the Cable Beach mega-resort, Baha Mar, skewed the data that year, according to the Minister.

“Since taking office in May 2012, the government has taken active steps to attract new sources of FDI, both in terms of countries of origin and sectors targeted for activity, as well as to maximize the returns from FDI in terms of sustainable job creation, skills and knowledge development and capacity-building,” said Rolle, a former Chamber president.

However, Rolle admitted the “unfortunate truth” that FDI isn’t always trickling downstream into economic activity for Bahamian businesses and professionals.

In order to receive the maximum returns from FDI, the government is moving to re-organize and strengthen The Bahamas Investment Authority (BIA), which is expected to undertake regularly scheduled, targeted investment promotion missions to both traditional and new markets.

The Bahamas, Rolle said, must become more proactive in seeking out potential investors. “This we are already doing,” he added.

The event drew investors from 27 nations and Rolle said that he’s expecting the meeting to “bear fruit for all” in the short to medium term.

Grand Bahama receives a $18 million a year government subsidy, which Rolle hopes will be eliminated in the future.

“Despite the challenges we face, The Bahamas is clearly still holding its own in attracting FDI and continues to be viewed as a global investment destination of choice,” said Rolle. “The $2.6 billion Baha Mar project continues to be on pace and on budget, and will transform Cable Beach on its opening in December 2014, as well as provide a major boost to the economy by providing 7,000 jobs for Bahamians.”

Although FDI continues to be the main source of large scale projects and investments in The Bahamas, that doesn’t mean government has overlooked small and medium-sized businesses, the Minister added.

“It is an unfortunate, but common, misconception that the incentive regime available to foreign investors is not available to Bahamian investors,” Rolle told Chamber members. “I wish to stress that it is just that, a misconception. The Bahamas maintains a generous legislative regime of tax and other concessions for all investors, and I would encourage more Bahamians to take advantage of these concessions.”

The Minister also commented on the current state of the local economy in light of the prolonged global recession.

“While we are confident that the worst is now behind us, full reinvigoration of the economy will necessarily depend on the pace of the global economic recovery,” Rolle said.

“For our part, the government will ensure that our national economic development plan is underpinned by fiscal prudence, characterized by careful management of public expenditure and sovereign debt.”

Oil industry magazine Offshore has reported on the recent decision by the Bahamas government to defer a public referendum on oil drilling until after exploration drilling has been completed.

Drilling offshore in Bahamas gets a step closer