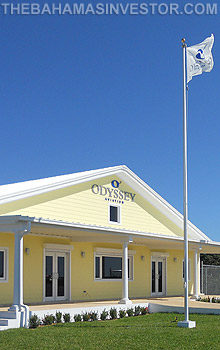 Odyssey Aviation Exuma’s new 2,500 sq ft facility, which commenced construction mid-May 2011 on the southeast side of the field, is the first private terminal at Exuma International.

“We have seen constant growth in private aviation traffic at the Exuma International Airport since we started our operation in December 2009,” says Steven K Kelly, president of Odyssey Aviation Bahamas.

“Along with the general interest in the Exumas as a destination location, the Sandals Emerald Bay Resort has played a key role in attracting private aviation customers,” said Kelly.

With growing interest in The Bahamas from world travelers and the holiday and spring break season upon us, Odyssey’s expansion of handling services on the island of Eleuthera come at the perfect time.

“Holiday traffic can create significant chaos for small islands,” said Kelly. “Flight departments, more than ever, desire good service and trusted representation for their passengers on arrival. Through its handling services, Odyssey Aviation Governor’s Harbour (MYEM) and Odyssey Aviation Rock Sound (MYER) bring what no one else has to this market–reliability, consistency and a high level of safety and quality service.”

Eleuthera is 60 miles east of Nassau and is best known for its tiny coastal islands and secluded beaches, the most famous being Harbour Island.

More than 15,000 people turned out February 25 to be a part of the official opening of the new Thomas A Robinson National Stadium, a gift to The Bahamas from the Government of the People's Republic of China. The audience was treated to cultural performances and a firework display. (BIS Photos/Derek Smith and Patrick Hanna)