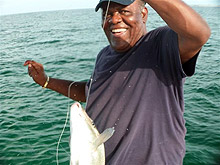 GRAND CAY, Abaco, Aug. 19 (FNM) — Today marks the 20th anniversary of the election of the first government led by the Free National Movement.

Sadly, on this significant anniversary we mourn the untimely death of National Chairman Charles T. Maynard, former Member of Parliament for the Golden Isle Constituency and former Minister of Youth Sports and Culture.

Charlie Maynard represented the youthful and dedicated energy that has made the Free National Movement a wonderful reflection of the Bahamian spirit.  Even as I salute the FNM, I also salute Charlie, and I acknowledge with deep gratitude all that he did for our party, my Government and our country.  It should not be lost on any of us that Charlie “died on the job” taking care of FNM business.

On this anniversary I am pleased to send greetings to and commend the leadership of the FNM which continues to labour in the field to safeguard a free and democratic Bahamas for this and future generations.

I am especially proud that because of the FNM’s victory in 1992 we were able to dismantle the culture of political intimidation and victimization so prolific in The Bahamas prior to 1992.

Twenty years ago, the FNM asked the Bahamian people to use the power of their vote to make Election Day August 19, 1992, a day of rebirth and deliverance for our beloved Bahamaland.

We promised we would provide responsive, accountable government in the sunshine.  We promised that together the government and people of The Bahamas would pursue a people’s agenda to make life “Better in The Bahamas for all Bahamians.”

The Bahamian people responded, making us the Government of our country for 15 of the past 20 years.  The FNM is forever grateful to the good people of The Bahamas for the trust they placed in us.  We worked hard and did our best to deliver on the promises and commitments set out in each of our election manifestos.

Whether in office or in opposition, the Free National Movement stands for strong democratic institutions and respect for and protection of the personal rights and freedoms of citizens. Core tenets of our party include fair play and the fundamental right of citizens to access: economic and social opportunity, education, adequate health care for all and support for the aged and disadvantaged.  The FNM fosters respect for our history and culture and responsible stewardship of our resources.

As a result of FNM policies The Bahamas has been changed forever
As compared to pre-1992,  today’s Bahamas is a more vibrant, modern country where citizens and residents enjoy private radio, television and telecommunications services giving voice to a wide-range of opinions free from government monopoly and control.  And today, citizens have access to cable television and the internet.

The FNM restored the reputation of The Bahamas internationally and raised our profile in regional and international agencies and organizations ratifying our accession to international conventions and treaties concerning human rights, children’s rights, human trafficking, protection of the environment, control of the illicit trade in drugs, chemicals and psychotropic substances and weapons.

On our watch elected local government was introduced for the first time.  We advanced reform of the public sector to reduce bureaucracy and increase efficiencies. We advanced the transformation of our Police and Defence Forces and of our Departments of Customs and Immigration. We reformed and modernized our national laws, rationalized the customs tariff structure reducing both the number and levels of duty rates, computerized the public service, put in place tamper-resistant electronic passports and immigration permits and launched the e-government portal.

We codified a transparent national investment policy, further incentivized Bahamian ownership in the tourism and manufacturing sectors, created the Securities Commission and The Bahamas International Securities Exchange (BISX) and facilitated expanded land and home-ownership.  In doing so, we broadened and deepened Bahamian ownership and added value to the economy. We significantly reduced the role of government as a competitor with the private sector in our economy fostering a shareholder society.

Transparent and accountable government facilitated the most dramatic increase in foreign direct investment in The Bahamian economy resulting in the restoration of Bahamian tourism to its position of regional leadership.  We strengthened our financial services sector.

We facilitated the realization of the dream of Freeport’s founders by developing a modern container transshipment port in that city, and further causing increased diversification of the national economy through the development of a ship care and repair industry in Grand Bahama, the hub of the country’s expanding maritime sector.

We increased the school-leaving age from 14 to 16, introduced foreign language instruction at the primary school level, devolved the College of The Bahamas, supported the evolution of the college to university status, facilitated the planning, construction and opening of the Harry C. Moore Library and dramatically increased funding available for tertiary level studies both at home and abroad.

To safeguard and promote our history and our heritage we created the Junkanoo Expo on Prince George’s Wharf and granted Crown Land to Junkanoo groups for the development of permanent “shacks” for the further development of junkanoo art.

We caused the development of the National Art Gallery in the acquired and restored historic Villa Doyle, enacted the Monuments Antiquities and Museums Act creating the related Commission, and acquired the former Shirley St. Theatre with a view to its future development into a proper National Theatre for the Performing Arts.

We increased government subventions to the National Youth Choir, the National Children’s Choir and the National Dance School. And we placed the photographs of key figures of the modern Bahamas on our currency: Sir Milo Butler, Sir Cecil Wallace-Whitfield, Sir Lynden Pindling, Sir Roland Symonette, and Sir Stafford Sands.

In health care, we built nine new community health clinics, commenced the dramatic upgrade and expansion of our hospital infrastructure including improving existing facilities at Princess Margaret Hospital, Sandilands Rehabilitation Hospital and the Rand Memorial Hospital.  We also commenced the construction of the new Princess Margaret Hospital and of two new community hospitals in Abaco and Exuma.

We created the Public Hospitals Authority and charged it with responsibility for the management of the three principal hospitals in the country.

We subsequently increased NIB pensions and more than doubled social assistance to widows, orphans and the indigent.

Free National Movement governments were true friends of labour reducing the work week from 48 to 40 hours.  We introduced a minimum wage, improved health and safety standards in the workplace and, in our second term in office brought unemployment rate to single digits – the lowest levels since the 1960s.  It was the FNM which introduced a landmark Unemployment Benefit.

The Free National Movement created the Bahamas Environmental Science and Technology (BEST) Commission to improve coordination of Governments’ actions in support of conservation and protection of the natural environment. We introduced a requirement for environmental impact assessments for all large development projects or any project in the vicinity of sensitive natural resources such as wetlands, fresh water reserves and wildlife habitats.

We more than doubled the National Park System of The Bahamas.  We increased ten- fold government’s contribution toward the maintenance of the park system by the Bahamas National Trust.  We declared the first of a network of marine protected areas meant to help The Bahamas meet its announced goal to protect 20 per cent of our natural environment by 2020.

We made the upgrade of public parks and recreational spaces a priority and we created new neighbourhood parks, open green spaces and seaside parks.

An important part of the FNM legacy in is the refurbishment and expansion of public infrastructure.  This sustained and planned programme was implemented over our three terms in office and designed to bring about a renewal of public amenities inclusive of water and roadway infrastructure the length and breadth of The Bahamas.

We caused the extension of electricity services to the most remote island settlements and islands in The Bahamas for the first time ever, facilitated the introduction of cable television and internet service to The Bahamas and the phased extension of these services to all Family Islands.

We caused the construction of new electricity generating plants in a number of the Family Islands to meet growing demands including Abaco, Bimini and Eleuthera.   We brought to an end the need to barge fresh water to New Providence from Andros following 35 years of what was to be an interim barging system.

The FNM is responsible for dredging Nassau Harbour enabling calls by the largest sea-going cruise ships in the world.  We reordered Prince George Dock creating a welcome centre, hair braiders pavilion and surrey horse facility in what had been a dusty unpaved parking lot and abandoned customs warehouses. We constructed a replacement Nassau Straw Market to replace that destroyed by fire. We removed freight handling from downtown Nassau and caused the development of a new Port of Nassau at Arawak Cay and the construction of a new 100,000 sq. ft. customs warehouse at Gladstone Road.

In our determination to make our capital island an example of a modern efficient metropolis we commenced and subsequently restarted the New Providence road and infrastructure project scheduled for completion in October, 2012.

The FNM is grateful for the opportunity to serve the Bahamian people during its terms in office. On this the 20th anniversary of our first election to Government I extend warm congratulations and heartfelt thanks to all those who contributed to our many lasting accomplishments.

What was achieved for the betterment of all Bahamians was only possible because of the insight, talent and dedication of many.  To each I say thank you for joining us on our march to making life better for all Bahamians.  I look forward with great anticipation to the achievements of The Bahamas and the FNM during the next 20 years.

The FTSE/Xinhua China 25 Index (FXI) has been rapidly trending downward at an ever accelerating rate since Q1 2011, despite a recovery following the credit bubble collapse in Q4 2007. Click through to the source to see a full size chart of the major trends in Chinese stocks over the last 7 years.

The British Colonial Hilton has added a Private Beach Club to its range of services and facilities.