Finance Ministers from the Commonwealth nations met in the US Capitol yesterday to discuss greater economic integration with the world's most powerful countries. The meeting took place during the Annual Meetings of the World Bank Group and the International Monetary Fund. Pictured is The Bahamas delegation in Washington DC September 21, 2011.

State Minister for Finance Zhivargo Laing led The Bahamas’ delegation at the Commonwealth Finance Ministers Meeting in Washington DC this week. The meeting took place yesterday at the International Monetary Fund (IMF) headquarters in the US Capitol.

At the meeting, which took place during the Annual Meetings of the World Bank Group and the International Monetary Fund, Ministers of Finance from around the Commonwealth addressed key contemporary challenges for members of the Commonwealth.

The next Commonwealth Heads of Government Meeting (CHOGM) will be held in Perth, Australia, 28-30 October 2011, under the theme of Building National Resilience, Building Global Resilience. 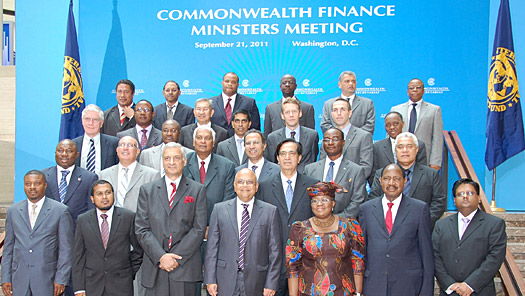 Finance Ministers from the Commonwealth nations pose for a group photograph in Washington DC on September 21, 2011. State Minister for Finance Zhivargo Laing is pictured front row on the left.

Environment Minister Earl Deveaux underscored government efforts to minimize the impact of the recession at the Abaco Business Outlook conference. Download a PDF of his entire speech here.

The offshore jurisdiction signed a tax information exchange agreement (TIEA) with South Africa last week. The agreement brings the total number of TIEAS signed by The Bahamas to 28.