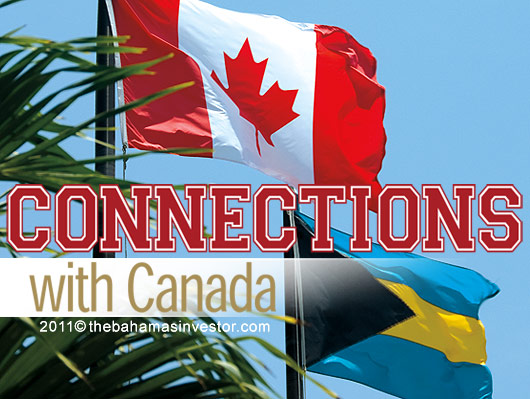 Former Canadian Prime Minister the late Pierre Elliott Trudeau once quipped: “Canada is a country whose main exports are hockey players and cold fronts… .” Fortunately for The Bahamas, Canada offers much more in trade, investment and tourist dollars than Trudeau led us to believe.

A recent report by the Caribbean Community’s (CARICOM) Office of Trade Negotiations labelled The Bahamas as being among the “most dynamic” of the organization’s member nations for attracting Canadian foreign direct investment (FDI). The report revealed that Canada injected CDN$11.7 billion FDI (US$12.4 billion) over the 22-year period from 1987 to 2009, growing nine per cent each year, with more than 40 per cent invested in The Bahamas’ finance and insurance sectors.

Canadian investments have had a lasting impact on this sun-soaked island nation, based on a “special” economic and political relationship spanning almost 200 hundred years. For example, The Bahamas’ three main banks are Canadian; the country’s premier cable television service was implemented by a Canadian; the Lynden Pindling International Airport is managed by a top Canadian firm; and the exclusive Lyford Cay residential community was founded by a Canadian industrialist.

Historic ties
The Bahamas’ friendship with Canada was forged in the mid- to late-19th century, when merchant ships based in Halifax would make the long journey south to the British colonies of the Caribbean and West Indies, carrying goods such as flour, timber, corn and fish in exchange for sugar and rum.

As trade flourished, so did Canada’s interests in expanding businesses, such as banks and insurance agencies, to the West Indies and the Caribbean region, including The Bahamas.

But as Canada was extending its economic reach to the Caribbean, political movements were also stirring in the region. After the First World War, Britain sought ways to consolidate the British Empire, including its Caribbean colonies. One solution considered transferring responsibility to Canada.

Although many Canadians were against the idea, because they did not want to be seen as a colonizing force, some in the business community, particularly those with businesses in the Caribbean, favoured it. T B Macaulay, son of the president of Sun Life Assurance Company of Canada, encouraged The Bahamas’ legislative council to pursue political union with Canada, however, it was ultimately rejected by Canada’s government, led by then Prime Minister Sir Wilfrid Laurier.

According to a New York Times article, published in 1911, Laurier’s government “did not look with favor upon the extension of Canada’s administration to a small group of islands a considerable distance from the Dominion.”

Nevertheless, this failed to diminish Canada’s business interests in The Bahamas–paving the way for establishing financial institutions and several significant investments that have helped shape The Bahamas’ economy to this day.

Canada trust
In banking and financial services, Canada has for a long time had deep roots in The Bahamas. The country’s three main banks–RBC Royal Bank, FirstCaribbean International and Scotiabank–are all Canadian.

In 1908, the then-named Royal Bank of Canada opened its Nassau branch. Since then, it has opened about 30 branches throughout The Bahamas, employing more than 750 persons and is the second largest bank in the Caribbean.

Canada’s Scotiabank also has deep ties with The Bahamas. The bank opened its first Nassau branch in 1956, quickly followed by five more branches and one in Freeport. Today, the banking giant has grown to more than 20 branches with “about 800 employees in The Bahamas,” according to former Scotiabank managing director Barry Malcolm, who notes that only around 15 employees are Canadian “in technical roles and credit risk operations.”

“Our relationship with Canada is a very close one,” says Malcolm. “Canada’s economic system, plus the fact that it is a commonwealth country, like The Bahamas, makes for a very easy and comfortable relationship.”

FirstCaribbean International’s Canadian heritage was established with the merger of its parent companies, Canadian Imperial Bank of Commerce (CIBC) and British bank Barclays Bank PLC in 2002. In 2006, however, CIBC became the main shareholder with 91.5 per cent of shares after Barclays sold its holdings.

The durability of Canadian banks in The Bahamas plays a big role in the friendly economic relationship both countries share, says Malcolm.

“Historically, the Canadian banks that have come here have had a long-term approach to banking and an interest in the economic development of the country.”

Westlake at RBC adds that recent projects, such as the Baha Mar resort development, the redevelopment of Lynden Pindling International Airport and the new residential community developments in Nassau, including Balmoral and Charlottesville, are testament to the potential for growth in The Bahamas.

“We think [the economy] will turn around and when it does [RBC] will want to be ready to be a big part of the next phase of growth,” he says.

Investment impact
Besides the obvious draw of sun, sea and sand, there are other reasons why Canadian businesses are attracted to investing in The Bahamas. The Bahamas neighbours the US market, and it is a top tourist destination. It has also recently signed a tax information exchange agreement (TIEA) with Canada that ensures that profits of Canadian companies domiciled in The Bahamas are not taxed upon repatriation.

Several Canadian companies are now taking advantage of The Bahamas’ favourable investment climate. According to the Bahamas Investment Authority, since 2008, 11 Canadian-owned projects were granted approvals. The bulk of these projects are residential developments throughout the Family Islands such as Andros, Eleuthera, Long Island, as well as in New Providence.

This follows a long line of Canadian investments that have made significant contributions to the Bahamian economy and have helped shape the country’s overall infrastructure.

Lyford Cay, for example, which is now one of the world’s most luxurious communities, was nothing more than swamp before Canadian industrialist Edward Plunkett Taylor laid eyes on it during a visit in 1945.

He purchased the land in western New Providence for $16 million and, in 1954, formed the Lyford Cay Development Co to plan the new community which included an 18-hole golf course, school, the prestigious Lyford Cay Club and residential lots.

Today, Lyford Cay is worth more than $2 billion with around 429 residences.

Cable Bahamas, the country’s top cable television and broadband provider, is another example of a significant Canadian investment.

Although it has been a Bahamian-owned company since 2010, when it repurchased $80 million of all shares from Barbados-based Columbus Communications Ltd, Cable Bahamas has distinctly Canadian roots.

Three members of Cable Bahamas’ board of directors are Canadian– chairman Philip Keeping, who established the company in 1994, and directors Brendan Paddick and Gary Kain.

Canadian arrivals
As The Bahamas continues to attract Canadian investors and maintains strong ties with Canada’s banking sector, the country’s number one industry, tourism, is also reaping benefits. Each year, the tourism sector sees a revenue boost from Canadian tourists who long to escape from their homeland’s bitterly cold winters.

According to the Ministry of Tourism and Aviation (MOTA), stopover arrivals from Canada increased by 22 per cent during the second quarter of 2010, despite the slowdown in the Canadian economy. However, with the Canadian economy strengthening in the latter part of 2010, indicated by Canada’s dollar nearing parity with the US dollar, The Bahamas anticipates another upswing of Canadian arrivals during 2011’s first and second quarters.

In an address during the MOTA’s 2010 fall/winter ad campaign held in Toronto, Director General of Tourism David Johnson summed up The Bahamas’ relationship with Canada, not only in terms of tourism, but also for the overall economy.

“We in The Bahamas remain cognizant of the contributions that Canadians have made, and continue to make, throughout The Bahamas; foremost in tourism arrivals, but also in education, trade, real estate and aviation,” he said. “The link between our two countries has been strengthened over the last century and continues into the future.”