When it comes to his Long Island-based business, the phrase “taking the plunge” is doubly meaningful for world record-breaking freediver William Trubridge.

The New Zealander operates the Vertical Blue Apnea Academy on Long Island, with his wife Brittany, a yoga instructor. At present, the couple run freediving and yoga programmes from September to May each year from their home, but they have much bigger plans for the project. “The basic idea is to create a single place where we can house and teach students,” says Trubridge. “It would be a venue for freediving courses, yoga courses and other disciplines that tie in with that philosophy.”

The world famous freediver says it was Dean’s Blue Hole on the island, which at 663 ft (202m) is the world’s deepest, that lured him some 8,400 miles from his hometown of Havelock North, New Zealand, to train and set up his business. “I first came here in 2005, just to see the blue hole and see if it would be suitable for training,” he explains. “When I saw how perfect it was, I spent more and more time here.

“[Dean’s Blue Hole] probably has the best conditions in the world for freedive training and it’s becoming more and more recognized as such. It’s seen now as the Mecca for freediving events.”

One such event is the Vertical Blue Invitational, which the academy hosts. At the event last December, the 31-year-old Trubridge became the first man to dive unassisted to a depth of 101m (331 ft) on a single breath of four minutes, 10 seconds. The depth-defying feat shattered the world record in freediving’s Constant Weight No Fins (CNF) discipline, which is considered to be the sport’s most gruelling discipline, with freedivers descending and ascending without the use of fins or a rope.

Learning to dive
With 14 world records under his belt, it’s hard to believe that up until about eight years ago, Trubridge knew next to nothing about freediving as a sport. He had, however, always been in and around water from an early age.

When Trubridge was a young boy, his family sold their house in England to buy a boat and make the transatlantic voyage from Spain to the Caribbean and across the Pacific Ocean, to eventually land in New Zealand. During that time, he basically “learned to swim and walk at the same time” and, at the age of eight, would often compete against his older brother to see who could dive the deepest. They would bring up a stone from the seabed and measure the depth on the depth sounder. Both reached close to 14m (45 ft)–a fraction of the depth Trubridge is capable of diving to today.

As the years went by, Trubridge aspired to pursue a career in creative writing, until a friend introduced him to freediving as a sport in 2003. He became hooked after a diving trip to Honduras and Belize and decided to forego creative writing to pursue a Bachelor of Science degree in physiology and genetics, and to immerse himself in freediving. He travelled to Sardinia where he trained under renowned Italian champion freediver Umberto Pelizzari, who operated his own freediving academy.

“He was a good mentor to start my career and I’m still good friends with him,” says Trubridge. “Our techniques have diverged quite a bit in the way I dive, but I’ve still retained a lot of the elements he taught me. Training under him was definitely a good way to break into the sport.”

Taking it to the limit
As Trubridge’s freediving records show, he didn’t “break into the sport” quietly. He became known as a diver who liked to test the limits.

“It was one of the hardest dives I’ve ever done … but the hectometer (100m) has officially fallen.” In January this year, Trubridge’s freediving achievements were officially recognized when he was named “best all around freediver” after winning the coveted World’s Absolute Freediver Award. The annual award is presented to the freediver with the highest combined score in six freediving disciplines–static apnea, dynamic apnea, dynamic apnea without fins, constant weight, CNF, and free immersion.

In static apnea, freedivers hold their breath either above or under water. Trubridge managed to hold his breath for an amazing seven minutes, 29 seconds. Equally amazing was his 237m (778 ft) swim in the dynamic apnea discipline, during a meet last year in Okinawa, Japan. In dynamic apnea, divers swim underwater as far as possible in a swimming pool, using long fins or a Monofin. If the pool were turned vertically, Trubridge’s feat would surpass the depth of Dean’s Blue Hole by more than 30m (100 ft).

Diving dangers
But such achievements didn’t come without rigorous mental and physical training, and an element of danger. Trubridge stresses that training with an experienced teacher is key in freediving–a sport where the wrong technique could prove dangerous, and even deadly.

“Should you ever train by yourself, or go spearfishing or freediving without proper supervision, it could be extremely dangerous.”

However, it’s not the depths that present the most danger, it is near the surface, at the end of the dive when a diver’s oxygen runs out. This can lead to shallow water blackout–a loss of consciousness that occurs during prolonged freediving when oxygen in the blood gushes back into re-expanding lungs as external pressure lessens.

Trubridge says he has experienced shallow water blackouts before, but says they are “not dangerous at all, as long as you have the right safety systems around you. Obviously, you want to avoid it, but it’s not critical.”

But for Trubridge, the sheer experience of freediving far outweighs the dangers. He describes the experience as nothing you can experience in the terrestrial world. “I guess freediving has the most [in common] with mountain climbing, but the sensation is so different, because you’re in a completely different element–you’re suspended in water, so it takes away the weight of your body, removes all sensations of sound, and at depth there’s very little light … you’re completely alone.”

“I try to just become as relaxed as possible and visualize the freedive,” he says. “The most important thing is to get into that zone where you’re not anticipating or concentrating on anything, and to dwell on the spaces between your thoughts where you just have an empty mind. It’s kind of a holistic discipline that challenges both your mind and body. For me that is very healthy.”

As he descends, he propels his body downward using strong, rapid strokes to about 18m (60 ft) where he reaches negativity buoyancy. Then he free falls into the darkening abyss at a speed that is faster than most people can swim on the surface.

Trubridge says he keeps his eyes closed during the dive, only to open them occasionally to gauge his distance on the rope markers. When he reaches depth, he focuses on his technique and “not the distance I?have to swim to get to the surface or how much water there is above my head.”

To ascend to the surface takes an incredible amount of physical effort. Trubridge’s technique consists of long, powerful arm strokes and frog-kicks to propel him upwards. He is not alone as he ascends, as guide divers monitor his progress and those critical moments when he reaches the surface.

Long Island on the map
When they are not in The Bahamas, Trubridge and his wife travel extensively around Europe where they run courses in their respective disciplines. This summer, they will be travelling to Italy, Switzerland, France and Dubai. When in Europe, Trubridge trains at the Tenerife Top Training complex in the Canary Islands. The complex, also called T3, is one of the world’s premier freediving training facilities, with a state-of-the-art pool and gymnasium. The freediver hopes to offer something similar with the expansion of the Vertical Blue Academy into a full-fledged facility that will incorporate all there is to learn about freediving and more.

The facility would also promote healthy living, working with local farmers to grow fresh fruits and vegetables. It would also be used to promote other issues close to the diver’s heart, such as marine conservation and the plight of endangered marine species, such as the Hector’s dolphin, which is endemic to New Zealand and is threatened by extinction.

While development plans for the expansion of the academy are still at the inception stage, Trubridge says he hopes to attract investors to the idea and help realize the hidden potential of “sleepy” Long Island. “The [freediving] events bring a lot of business here from all the people who come out to spectate when we do our record attempt diving,” he says. “And there is plenty of land available within walking distance to the blue hole. It’s just a matter of getting investors on board who can see the value of this kind of project.

“Long Island is a beautiful place–it’s a little bit off the beaten track in The Bahamas, so it has preserved its identity. We get quite a few local people who come out when we dive. They come out to spectate and support me, which is great. We hope that in the future, we can give more back to the community.” 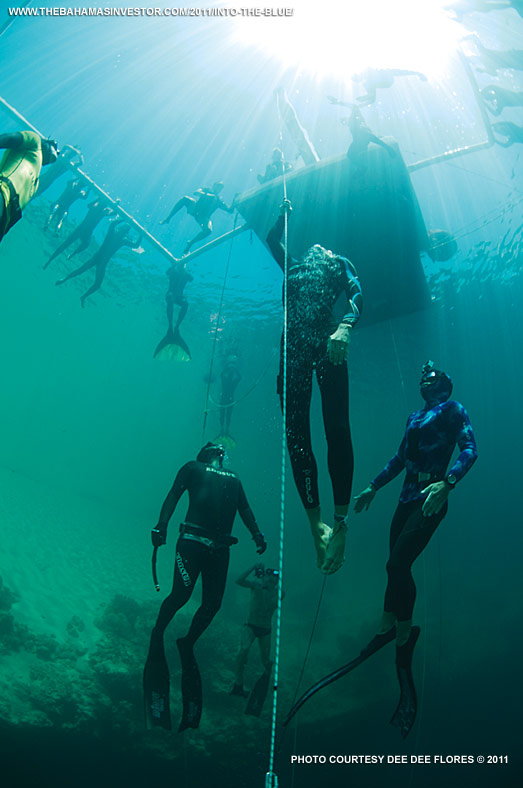 Among emerging markets, the Latin American region offers unparalleled opportunity for The Bahamas