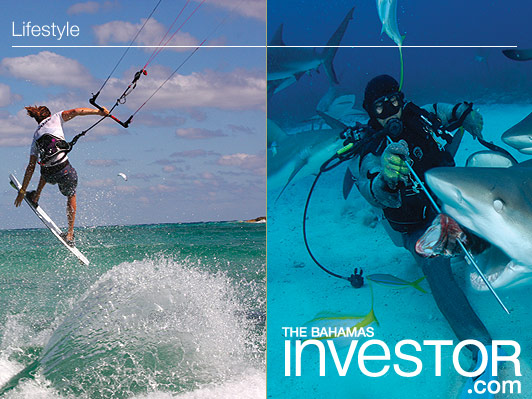 Replicating the thrill of fast-paced business outside the confines of the boardroom is easy in The Bahamas. For the growing breed of young, adventurous high-net-worth individuals (HNWIs), the islands are an ideal setting for kitesurfing, shark diving, big game fishing and many other extreme sports offering an adrenalin rush unmatched by the stock market.

Riding the waves in Exuma
To the casual observer, kitesurfing or kiteboarding resembles a mixture of windsurfing, paragliding and acrobatics. Balanced on a surfboard and using an airborne kite for power, kitesurfers can literally fly through the air–reaching speeds of 30 mph, with the world-record holder reaching 55.65 knots or around 64 mph.

Skimming the surface of the waves at those speeds can be dizzying, but compelling, says Gary Sweeting, who owns Exuma Kitesurfing, based near George Town, Exuma.

“The common description is that it is addictive, hypnotic,” he says. “There is something mesmerizing about flying a kite in all directions and being on top of the water like that, even for beginners.”

Since he opened Exuma Kitesurfing in 2007, Sweeting has catered to all abilities, offering packages ranging from eight-hour beginner sessions to organized trips to the best spots in Exuma for the more experienced. Among his client list are hedge fund managers and wealthy entrepreneurs.

“The pull of the kite is like holding on to the back of a moving train. What draws people is the adrenalin rush of that power, mastering that power and the thrill of jumping–I have had 40 ft of air under my board before.

“There is a danger element to it. You can die doing it, but the main thing to remember is to let go of the control bar to de-power your kite. Your instinct is to hold on, but you have to let it go, if you feel you are in danger.”

Some of his wealthier customers have the pick of the world’s waters to try out their kiteboarding skills, but, Sweeting says, they all agree that Exuma is unique. “Exuma is the best location for many reasons,” he explains. “[The island gets] the frontal winds and a little boost from the trade winds; there is a multitude of sandy bottom beaches and shallow water. It is hands down the best water.

“Most people that come say it is the best place they have ever kiteboarded.”

Once kitesurfers master the basics of controlling the kite, changing direction and coming to a stop, they can move on to more advanced techniques, such as jumping and twisting mid-air, putting on eye-catching displays.

Sweeting, who has reached speeds of up to 35 knots on his board, says he relishes the more acrobatic side of the sport. “It is not about the speed for me. It’s about the jumps, tricks and kiting in the waves.

“Watching windsurfing is pretty boring, but watching kiteboarders, you cannot help but stare. When you are kiting you forget all your worries.”

Fighting fish
While chasing the waves on the surface provides a high, so too does pursuing what lurks beneath them.

Charter Captain Nigel Lewis from First Class Charters has been pitting his wits against some of the biggest fish in Bahamian waters for over 20 years–something he says requires both brains and brawn.

“It is exciting. There’s the serenity of the water followed by the adrenalin rush when you hook a fish,” he says. “The fish is trying to get away and your job is to coordinate your movement to bring him on to the boat. It is almost hand-to-hand combat.

“It takes more than just muscles and guts to bring him in. It is a dance, and unless you get that choreography perfectly right, you may hook a fish, but you will not catch a fish.”

During a typical day trip experience at First Class Charters, a subsidiary of Seahorse Sailing Adventures, customers are taken out on Lewis’s 55 ft Ocean Sport Fisher, named Martini On The Rocks, to either the Berry Islands, Exuma or Andros, depending on the season and where the fish are congregating.

Between Andros and New Providence lies the Tongue of the Ocean–a deep oceanic trench, which plunges down to depths of up to 6,000 ft. The oceanic waters of the Tongue attract a wide variety of pelagic fish including tuna, sailfish, billfish, king mackerel and wahoo; all of which can put up a good fight, according to Lewis, who once spent three hours trying to overpower a feisty sailfish.

“You live for the term ‘fish on’ [meaning that the fish is hooked],” he continues. “When you hear it, the scramble begins and you strap yourself into what is called the ‘fighting chair.’ You need to know how to bring the fish in properly. You do not want to break your line or pull the hook out.

“You get a feel for what they are like. Then your challenge is to hold them. The fish is jumping, dancing on its tail, you wonder if your line is going to break. Your muscles knot up; you get tired and you just hold on.”

Big game fishing is often labelled an extreme sport because of this violent tug of war and the unpredictability of the fish, which can be very large and very aggressive. “There is a certain degree of care that has to be taken,” warns Captain Lewis. “It can become extreme, especially when you have a billfish. People have actually died [trying to catch one]. I have heard of boats where the billfish has penetrated the stern of the boat, so if someone was in the vicinity they would have been speared.

“We took a six ft barracuda once off Andros … teeth like razor blades. If it starts thrashing around, everybody wants to jump off the boat.”

On Lewis’s charters, guests most often catch black fin groupers weighing up to 50 lbs. “If you hook one of those, you can expect to be 45 minutes fighting with the rod,” says the Captain. Clients can also encounter tuna, mahi-mahi and wahoo.

Seconds after the fish is reeled in, the boat’s mate begins preparing it for the grill, so guests can eat their catch at lunch. “We clean them, season them and throw them on the grill. Then the party really starts,” says Lewis.

Food for the sharks
From eating fish to feeding them, The Bahamas is widely regarded as the best place in the world to see sharks in the wild and, in Nassau, you can even serve them lunch.

Stuart Cove’s Dive Bahamas offers certified divers regular trips to waters south of New Providence where they can swim with sharks and participate in controlled feeding of the ocean’s top predators. The intrepid divers are taken 50 ft below the surface where they crouch in a semi-circle on the sea floor. They are then joined by the dive leader, who carries a box of bait to entice the sharks. The most common lunch time diners are Caribbean reef sharks, which can measure up to 10 ft long. Those brave enough to get in the water are often surprised by how graceful and beautiful these sharks are up close, according to owner Stuart Cove.

“There is a hush on the docks before people go out because everyone is nervous, but when they get back it’s really noisy. Everyone is talking about it,” he says.

Around 40 per cent of the divers who come to Cove’s diving operation, come for the sharks. Cove, who has been taking visitors out for shark interactions for over 20 years, says they come for the thrill of it and because The Bahamas is one of the best places in the world to see the predators in their natural habitat. “There are very few places in the world where you can find healthy populations of sharks.”

Cove has been the “shark wrangler” for several Hollywood productions including Never Say Never Again and Jaws IV. He says people are naturally curious and excited about the creatures. “Our dives are really popular, because shark diving is such a rush.”

For those seeking a shot of adrenalin, The Bahamas offers thrills above and below its aquamarine waves.

Antoinette Russell, the first woman, first Bahamian to be trust centre head at Credit Suisse believes success is all about having the right attitude

The power of positive thinking